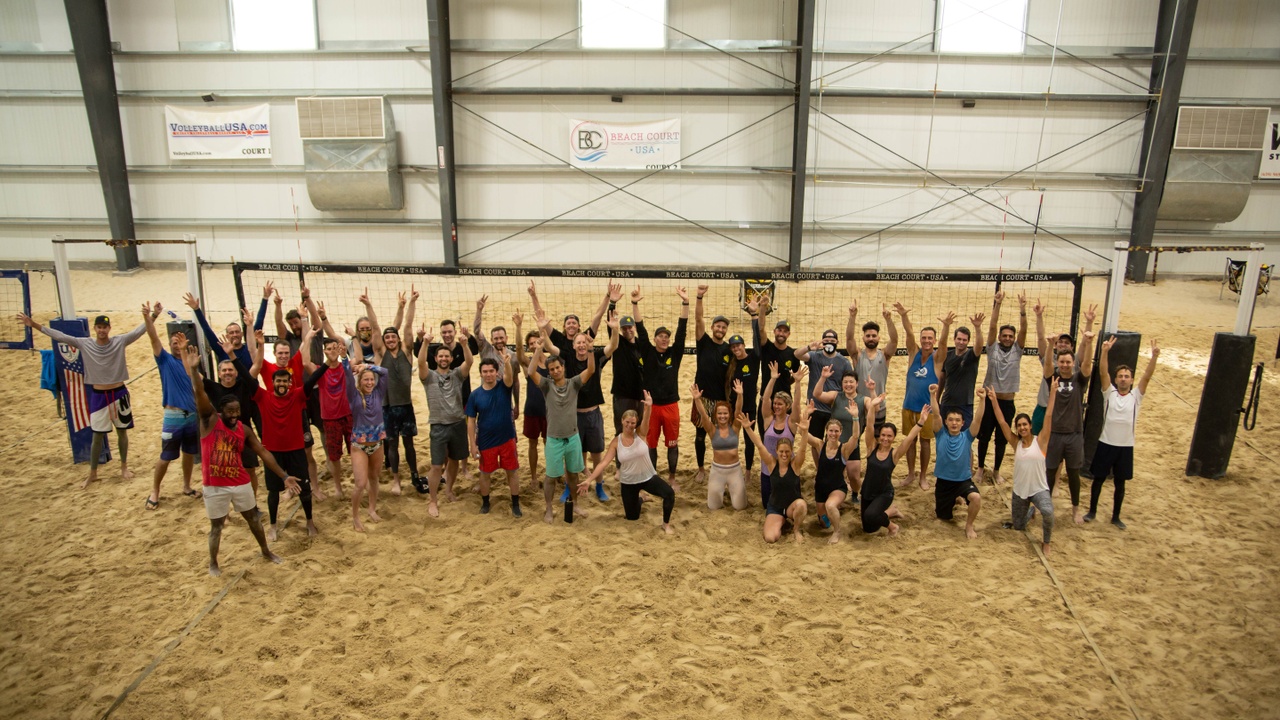 Three years ago, Victor Fitch was, in his own words, “a strung out drug addict.” Weeks away from being homeless, from losing all contact with his son, Fitch enrolled into a treatment program. We hear of the 12 step recovery process often.

It’s rare that we hear volleyball is one of them.

In his treatment program, Fitch discovered a love and passion for volleyball. It’s a sport he describes as “church, it’s my connection to the sober community and a huge outlet.”

Last week, at a Better at Beach camp in Salt Lake City, Fitch was given the opportunity to take a week off of his job at Netflix and, well, go to church.

So VolleyCamp Hemosa became Better at Beach where, contrary to popular belief, you don’t need to be located in Hermosa Beach to become better at beach volleyball. You can be anywhere in the world.

Campers arrived from dozens of different corners of the country, even the world, showing up at all different levels, with varying goals of all shapes and sizes. Take Laila Dounas, for instance. She’s a Moroccan native currently living in San Francisco. She had been introduced to beach volleyball only a few months prior to the camp, and saw it as an opportunity to expedite her improvement.

If there’s a place to do exactly that, it was the Salt Lake City Better at Beach camp. Each day, broken up into a morning and afternoon session, with the opportunity for private lessons and open play between, featured a focus on one or two skills. Over the course of the week, it is not an exaggeration to say that Dounas passed thousands of balls, set thousands of balls, hit until her shoulder experienced an altogether new type of soreness (but a good one, we promise), and left three, maybe four times improved from when she entered.

Evan Welch, meanwhile, came with no such volleyball specific ambitions in mind. A natural athlete, adulthood had done to Welch what it does to many of us, padding too much extra weight on a mobile and coordinated frame. Welch came to lose a few pounds, and if he happened to get better at beach volleyball while he was there, well, great. Several players at the camp wore WHOOP recovery devices on their wrists, which measure, among many metrics, the amount of calories burned in a single day. Multiple players registered days of more than 6,000 calories burned.

Welch achieved his goal: He slimmed down. (And if you're also looking for an excellent way to slim down and gain lean muscle mass, our 60 day strength and conditioning program is phenomenal)

Who knew he’d also leave as inarguably the most improved server at the camp? 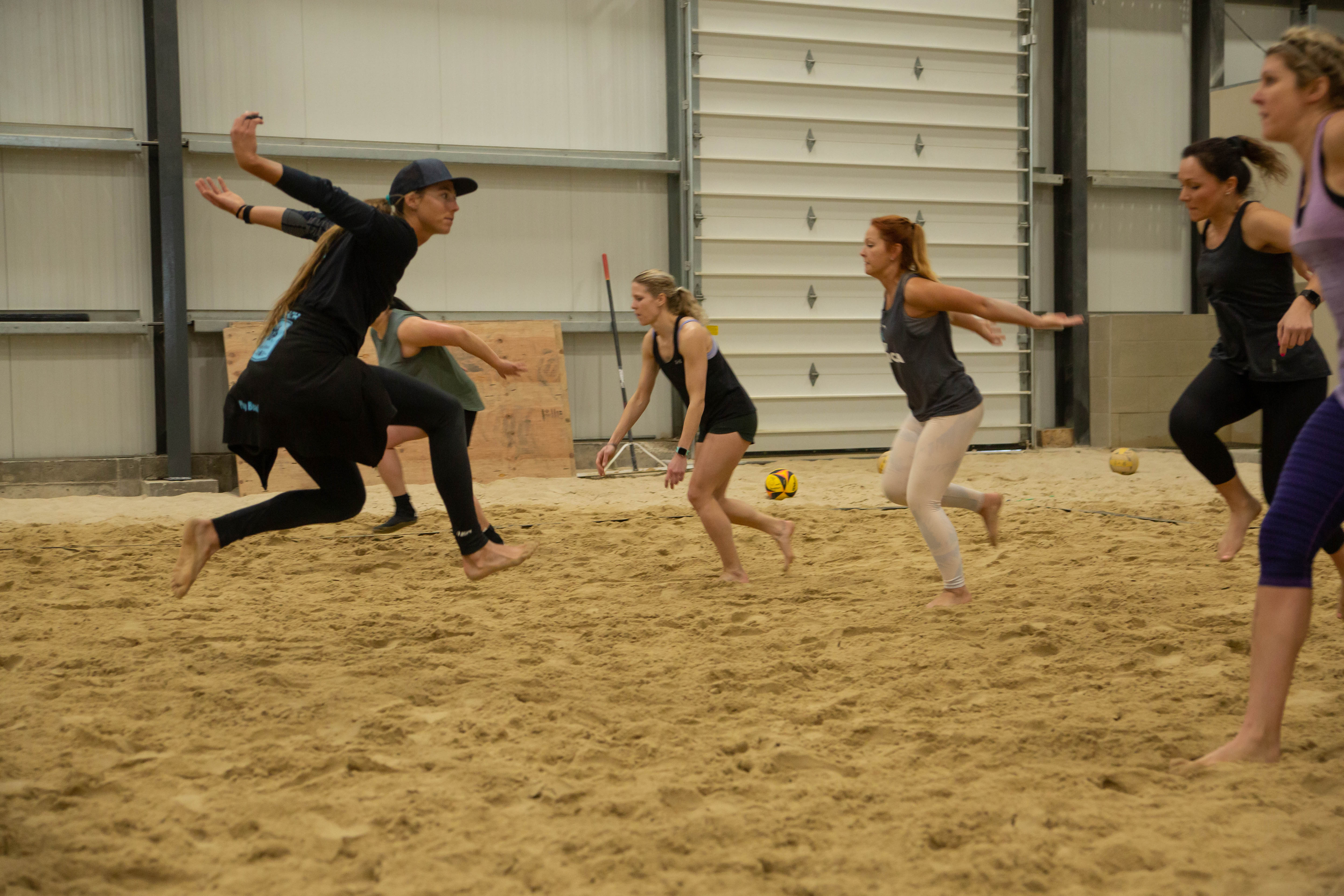 Michelle Wiecha and her husband, Arne, arrived, like Dounas, from San Francisco, though their roots are in Frankfurt, Germany. Seeing as this was only the second total Better at Beach camp, this was their first, though they had been to more than a dozen of Tom Davenport’s fantastic South of the Border Volleyball Vacations.

The SOBs, as they’re called, take beach volleyball enthusiasts south of the border, to Ixtapa, Cabo, and Puerto Vallarta, among other photogenic beaches in Mexico. There is an undeniable similarity to Better at Beach camps and the SOBs, in that the focus is beach volleyball all day, every day. They’re both wonderful opportunities to build a community, to meet people from all over the world, sharing the common bond of an unusually deep passion for beach volleyball.

The differentiator between the two is the overarching goal of the week: Better at Beach is aimed at exactly what’s in the name – getting the campers better at beach volleyball. The SOBs are vacations, where the primary focus is on playing, meeting people, going out late into the night, having fun. There’s an element of improvement there, too, as Davenport hires a world-class staff of professional coaches -- Jake Gibb, Casey Patterson, Sean Rosenthal, Billy Allen, Geena Urango, Emily Hartong, Kelley Kolinske, Troy Field, to name a few -- to teach hour-long clinics each day. But the primary focus is social, letting go of a week off work. If you get better, so be it.

But to have a great time is what they’re looking for.

Michelle and Arne noted these differences, agreeing that one is not necessarily better than the other. Better at Beach is just different. Which is exactly what Burik and co-owner Brandon Joyner were going for. They didn’t want to step on Davenport’s toes; he has a tremendous thing going with the SOBs. 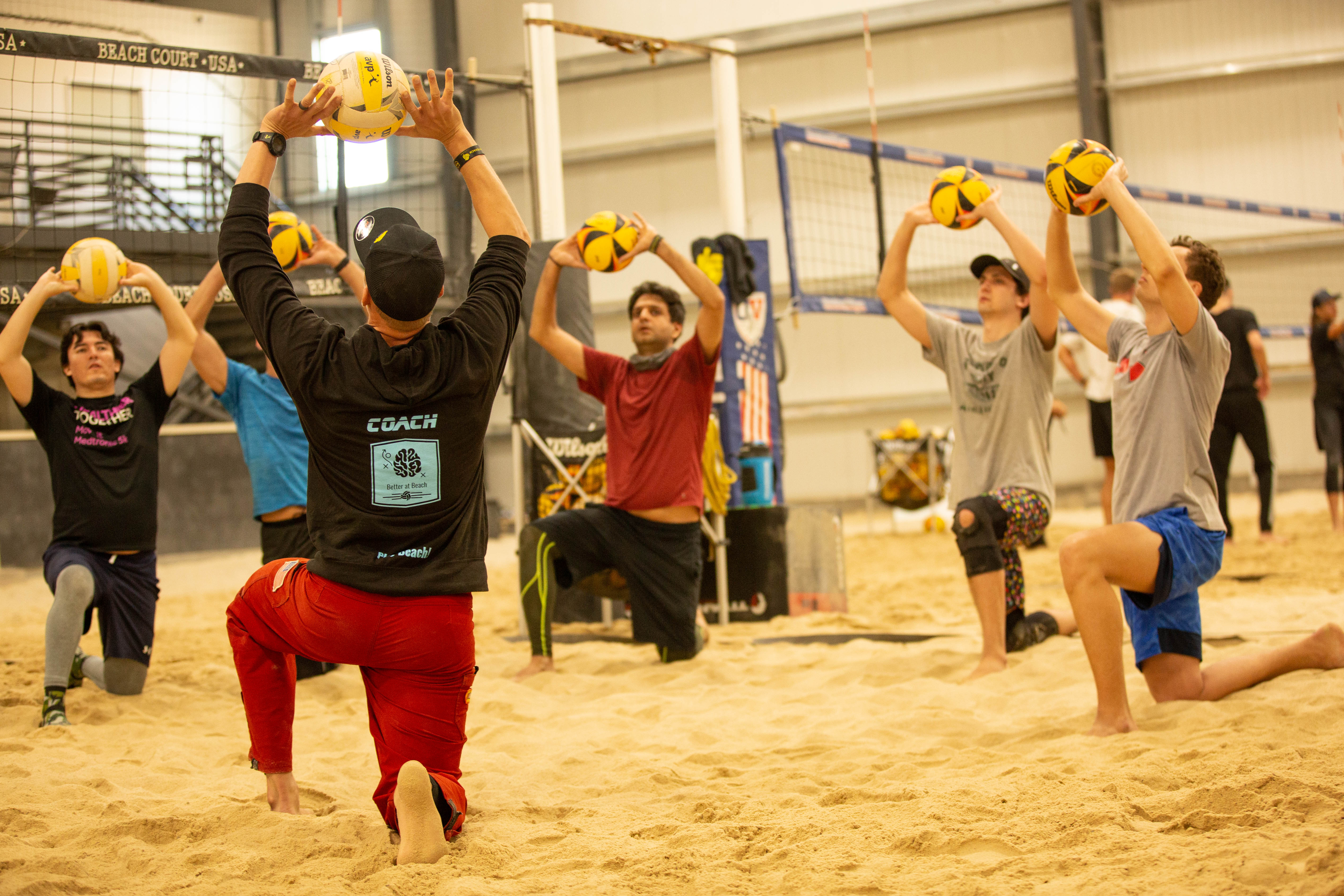 There’s room for camps for guys like Ray Alexander, who came to Better at Beach with a specific goal in mind: To get good enough to move down to Hermosa Beach.

Chris Jones already lives in Hermosa Beach. Has long lived there. His goal in Salt Lake was to improve enough to climb the ladder in the South Bay.

In Saturday’s finishing King of the Court style tournament, Jones made the final round.

Peter Peck and Dan Stevens arrived for similar reasons, only on a higher scale. A pair of legitimate open players who have every bit enough talent and ability to qualify for a main draw on the AVP Tour, Peck and Stevens were put through a professional level training camp on the top court – courts were divided into, among other things, skill level, so open players were put with open, A with A, and so on and so forth. It’s an eye-opening experience, doing that for the first time. It’s only a matter of time before Stevens, now living in Santa Barbara, begins entering in qualifiers – and winning in them.

Campers did plenty of winning in Saturday’s tournament. The open division was swept by the coaches: JM Plummer and Travis Mewhirter won, with Burik and Colby Burleson coming second, and Joyner and Stevens in third. Delaney Mewhirter, who coached the camp, took second with Siena Poyfair. Women’s A was taken by Ashley Garza and Tina Kolkebeck, while women’s B went to Kharisma Knepshield and Wiecha.

Almost all came for a little something more than beach volleyball.

Fitch came for a sanctuary.

In Salt Lake City, he found one.

Once signed up, you'll be able to watch the in-depth tutorials, film your “before” videos, start and film your at-home drills and begin posting to our Private Facebook Group. Then, our coaches will break down your mechanics, footwork, and touch at our weekly online meetings. Yes, that means we look at YOUR videos and we coach YOU!